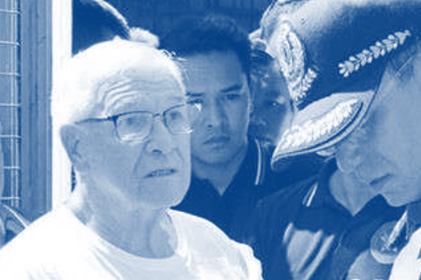 TALUSTUSAN, Philippines — The American priest’s voice echoed over the phone line, his sharp Midwestern accent softened over the decades by a gentle Filipino lilt. Recording the call, was a young man battered by shame but anxious to get the priest to describe exactly what had happened in this small island.

“I should have known better than trying to just have a life,” the priest said “Happy days are gone. It’s all over.”

But, the young man later told the Associated Press, those days were happy only for the priest. They were years of misery for him, he said, and for the other boys who investigators say were sexually assaulted by Father Pius Hendricks.

His accusations ignited a scandal that would shake the village and reveal much about how allegations of sex crimes by priests are handled in one of the world’s most Catholic countries.

He was just 12 — a new altar boy from a family of tenant farmers anxious for the $1 he’d get for serving Mass — when he says Hendricks first took him into the bathroom of Talustusan’s rectory and sexually assaulted him.

“I asked why he was doing this to me,” the 23-year-old said in an interview.

“It’s a natural thing. It’s part of becoming an adult,” The priest told him.

The abuse continued for more than three years, he says, but he told no one until a village outsider began asking questions about the American priest’s generosity with local boys.

After the abuse was reported to police, local authorities arrested Hendricks, 78, and charged him with child abuse. Since then, investigators say, about 20 boys and men, one as young as 7, have reported that the priest sexually abused them. Investigators say the allegations go back well over a decade — though many believe it goes back for generations, and could involve many dozens of boys — continuing until just weeks before the December arrest.

Hendricks’ lawyers insist he is innocent.

The Associated Press, which does not identify victims of sexual assault, has met with five of the accusers.

Hendrick’s arrest was a sudden fall for a priest who had presided over this community for nearly four decades. He rebuilt Talustusan’s chapel and installed rooftop loudspeakers to summon parishioners to Mass. He pressed officials to pave the village road. He drove the sick to hospital, and paid school fees for poor children.
But the case also reflects much about the Philippines, a country where the church has long shrugged off the presence of its sex offenders.

“It’s a culture of coverup, a culture of silence, a culture of self-protection,” said the Rev. Shay Cullen, an Irish priest who has spent decades in the Philippines and works with victims of child sexual abuse.

In 2018, after the young man had gone to police he recorded a phone call with the Fr. Hendricks.

Hendricks laments the passing of those happy days, and admits to an unspecified “mistake on my part.”

In 2002, the Philippines’ national conference of bishops ended years of silence to admit that the church faced “cases of grave sexual misconduct” among the clergy. One archbishop estimated that 200 of the country’s 7,000 priests may have committed some form of sexual impropriety.

But in a country with more than 80 million Catholics, such promises have long disappeared into a haze of tradition, piety and clerical influence that suffuses everything from sex education classes to national politics.

Until about 2013, the church’s own guidelines insisted bishops did not need to report sexually abusive priests to police, saying they had “a relationship of trust analogous to that between father and son.” Media reports and legal action “adds to the pain” in cases of sexual abuse, Manila Cardinal Luis Tagle told the Catholic news site UCAN in 2012. In Asian cultures, he said, it is often better for such cases to be handled quietly, inside the church.

The church’s influence remains vast, even as it has seen its power chipped away in recent years, weakened by the spread of evangelical missionaries and attacks by the nation’s president, Rodrigo Duterte.

Duterte, who says he was sexually abused by a priest while he was a student, has publicly derided bishops as “sons of bitches,” and urged Filipinos to stop going to Mass.

In Biliran, the poor island where Hendricks spent nearly half his life, his fondness for boys had been widely discussed among villagers, local officials and, according to a former Catholic brother, members of the clergy. While many people had long believed he was a paedophile, almost nothing was said openly. Nor did anyone act on the suspicions.

On the island of Bohol, the priest Joseph Skelton says mass, more than 30 years after the then-seminarian was convicted of sexual misconduct with a 15-year-old boy. Local news reports reveal even more working clergyman: the priest outside Manila who recruited young men for the priesthood after admitting to sexually assaulting teenage boys; and the priest who moved into a bishops’ residence after being accused of raping a 17-year-old girl.

Prosecutions of accused priests are exceedingly rare, and convictions are rarer. “No priest in the Philippines has ever been convicted” of child sexual abuse, Bishop Buenaventura Famadico, who oversees a diocese south of Manila, told the Catholic newspaper La Croix last year. By comparison, the group BishopAccountability.org says that since 1990 more than 400 priests have been convicted in the U.S. on child sexual abuse charges.

The 23-year-old from Talustusan man said he might not have come forward without encouragement from an American visitor to the village, the boyfriend of a woman related to an accuser. The American was shocked at the gifts the priest had doled out to him and other local boys and began to ask probing questions.

“He kept asking why Father Hendricks was doing these things for boys in the village,” said the 23-year-old, who began wrestling then with his own feelings about what he should say.

“I thought this might be it, this might be the help I’m asking for, that my life will change,” he said. Finally, he told his family, and then local authorities, about the abuse.

Even then, the case may not have gone anywhere without intervention by the U.S. Department of Homeland Security. The agency started its own probe of Hendricks under a statute that allows the U.S. government to prosecute child sexual abuse by American citizens anywhere in the world.

The local case against the priest would have stalled if U.S. authorities hadn’t started their inquiry, pressuring Philippine authorities to act, according to an investigator involved in the case, speaking on condition of anonymity because the investigation is still under way.

Kenneth Hendricks was born in 1941 in Cincinnati Ohio, as the Great Depression was grinding to an end. His parents divorced when he was young, and Hendricks’ mother supported her two sons by cleaning houses.