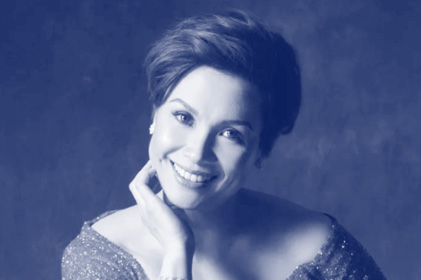 We know that Salonga provided the singing voice in Mulan, the animated movie. Lea Salonga said: ”It was quite something to experience that … and how big of a deal that was going to be, being an Asian face on that stage.”

Salonga has made something of a career playing strong women in the realm of musical theatre: Kim in Miss Saigon, Eliza Doolittle in My Fair Lady, Mei Li in The Flower Drum Song and, unusually, both Eponine and Fantine in Les Miserables.

The signature songs from some of those roles, and others, form the basis of a touring concert show that Salonga is bringing to Australia in November. And each, she says, comes with a rich palette of memories.

Now 48-years old, the Broadway star came to musical theatre as a young woman. She was only 18 when she sang in the London production of Miss Saigon for the first time. She spent her 20th birthday performing the same role over and over again. The first musical she saw was Evita, at London’s Prince Edward Theatre, when she was just 11. The show itself was barely three years old, with Elaine Paige and David Essex in the lead roles.

“I remember thinking, oh my god, this is an amazing thing I am watching now,” Salonga says. “I knew the song, Don’t Cry for Me Argentina, but not in the context of the show and there are images from that that have remained with me, including the voice of Eva Peron. She was young, beautiful and very
strong on stage.

“It’s only now, many years later, that I understood the impact of what that was, of, say, somebody of colour being able to look at me and seeing me up on that stage and doing what I do. And having that person think, ‘if she’s able to do that, then of course I should be able to do that as well’.”

For Salonga, the stage is both a solitary and collaborative space. “It’s me, it’s my voice, it’s my person up on centre stage with a microphone, backed up by musicians. But there really is a team behind me, so whether I’m in the company of, say, 20, 30, 40 other people on stage, or by myself with a bunch of musicians, I never really feel completely alone.

“It feels like I’m still walking a tightrope, but I have a very comfortable safety net underneath. And it’s nice to think of it in that way.”

Robin Padilla backs out of movie; Ozawa calls him ‘unprofessional.’ by Rio Matro

FAMS to show The Mikado