Some 300 live, dying and dead turtles were seized by Philippine Marine Authorities from the Chinese boat caught poaching at Half Moon Shoal in the West Philippine Sea on May 6. Eleven Chinese crew members have been detained since then and were charged by the Bureau of Immigrations.

“The seizing of the Chinese fishing boat, carrying large numbers of endangered species, and the apprehension of its crew by the Philippine National Police Maritime Group Special Boat Unit were undertaken as actions to enforce maritime laws and to uphold Philippine sovereign rights over its EEZ,” the Department of Foreign Affairs said.

In a statement, Zhang Hua, spokesman for the Chinese embassy in Manila, said “solemn representations” had been lodged by the embassy to the Philippine side over the incident, reiterating China’s “indisputable sovereignty over Nansha Islands and their adjacent waters, including the Banyue Reef,” China’s name for Half Moon Shoal. The Philippine government ignored the Chinese demand.

Half Moon Shoal is located just 60 nautical miles west of Palawan and is within the Philippines’ exclusive economic zone. The number of sea turtles have drastically declined and they are now regarded as endangered species. 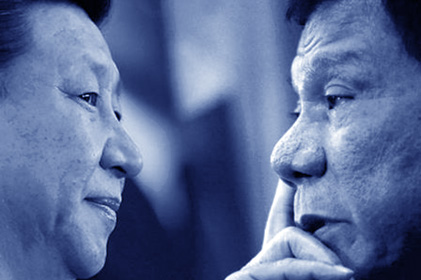