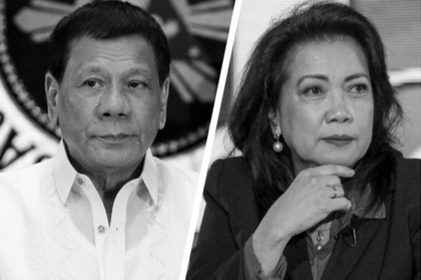 “Kung kahina-hinala na napakadami ng pera ang isang pinuno, dapat may paliwanag ‘yun. At ang paliwanag na iyon ay dapat ibigay sa tao,” (If a head of state has a lot of money that is questionable, he should explain the source to his constituents), she said during a voter’s education forum at the University of the Philippines Visayas in Iloilo City.

Her remarks came after a report from the Philippine Center for Investigative Journalism (PCIJ), which examined the wealth of members of the Duterte family.

Sereno also slammed the President for attacking journalists who are critical of the administration.

“Mali ‘yun kasi parang sa Constitution at sa batas natin, nandoon ‘yun dapat may pakialam tayo, lalo na sa ganoong klaseng allegations na ang layo daw ng inilaki ng yaman nila,” (That is wrong because it is clear in the law and we should get involved, especially when the allegations state that there was a large jump in their wealth), she said.

Sereno said these allegations can’t simply be swept under the rug, considering some members of the Duterte family are being linked to the narcotics trade.

Presidential spokesman Panelo however said that Duterte’s critics are merely ‘nitpicking’ on the president’s Statement of Assets, Liabilities and Net worth.

In its report, the PCIJ noted that President Rodrigo Duterte, daughter Sara Duterte-Carpio, and eldest son former Davao City Vice Mayor Paolo Duterte “have all consistently grown richer over the years, even on the modest salaries they have received for various public posts, and despite the negligible retained earnings reflected in the financial statements of the companies they own or co-own.”

Sara is seeking re-election as Davao City mayor while Paolo is running for the city’s first district representative.

The PCIJ noted that across the 10-year period from 2007, the President’s wealth nearly tripled, Paolo’s wealth more than tripled, and Sara’s wealth grew more than 6 times.

Spokesman Panelo said: “If Atty. Sereno and the PCIJ believe that the increases relating to the President’s assets are ill-gotten, they should file the appropriate charges instead of nitpicking and using media.” Ω

Comparing one Manny and the other by Greg Macabenta

Why I did not vote for Duterte