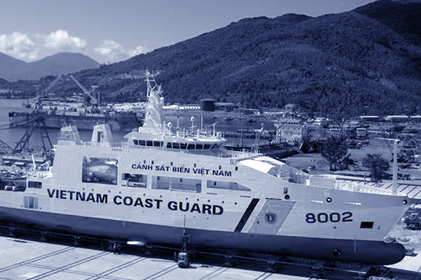 No bribe-taking. No cowardice. No lawyering or lying for China. No excuses for inaction. Just assert rights over EEZ based on international rule of law.

China has withdrawn half their maritime fleet from Tu Chinh Reef (Vanguard Bank). The scale of Chinese ship operations seems to have shrunk, with most ships having backed off from Vietnamese controlled waters.

All Vietnamese Coast Guard and Fisheries Resource Surveillance ships remain deployed at to sea, none having retreated or withdrawn as they work to protect Vietnamese sovereignty.

Basically, Vietnamese law enforcement vessels were able to entirely protect Vietnamese sovereignty on their own without any risk or fears from “nuclear war”, a threat foreign sources claimed would happen to anyone who stood up against the Chinese territorial ambitions.

This entire operation was conducted with absolutely Zero military intervention. It was strictly conducted only with the “white hulls” of two Vietnamese maritime law enforcement groups ━ the Vietnamese Coast Guard and the Vietnamese Fisheries Resource Surveillance. Ω

Will All Hell Break Loose Soon? by Erick San Juan